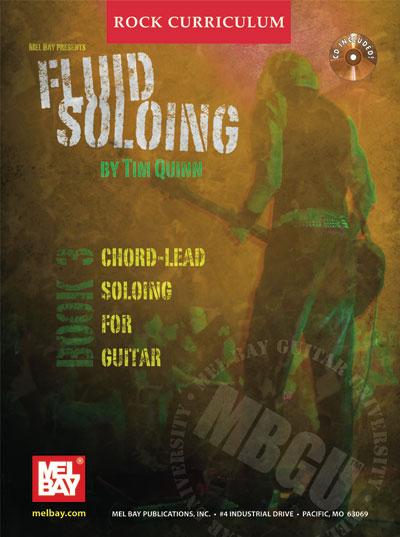 The 3rd Instructional Guitar Book in the Fluid Soloing Series

Book 3 in the series is a complete method for developing fluid double-stop chord melody. This style of playing can be heard most notably in the playing of Jimi Hendrix (in songs such as The Wind Cries Mary, Little Wing, and Castles Made of Sand), as well in the music of the guitarists he influenced, including Steve Vai, Eric Johnson, and Stevie Ray Vaughan.

Chord-lead style playing bridges the gap between straight lead and strictly rhythm, because it is simultaneously chordal (implying a specific major or minor chord) and melodic (carrying a distinct singable melody). This book shows the guitarist how to develop this technique and create continuous connections of moving voicings, merging lead and rhythm into one flowing melodic chordal texture.

This is accomplished through a comprehensive collection of chord-lead phrases, each of which is presented in at least three different fingerings (important for whole-neck flow). These phrases are then assembled into soloing etudes that demonstrate practical application over different chord progressions. Chord-lead playing can be adapted to every style of music, including rock, jazz, blues, alternative, funk, R&B, country, and pop.

Mastering chord-lead soloing for guitar also greatly increases the artist's ability to stand alone; that is, to play by himself unaccompanied by other musicians, mixing and switching between chording and lead improvisation. This book is perhaps the most definitive guide ever written for mastering this highly sought after (yet elusive) style of playing. CD or free download included. Standard notation and tablature.

You will be hard pressed to find another instructional guitar book that combines all of the facets of chord-lead soloing for guitar in such an easy to read and learn format.